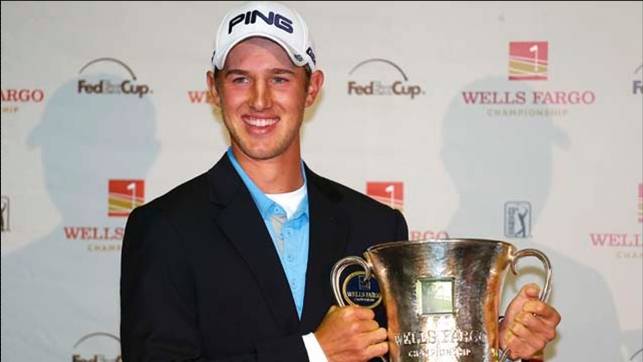 The PGA Tour had another first time winner this past weekend at the Wells Fargo Championships, Derek Ernst.  Derek age 22 is a UNLV graduate has a great story this week. Derek was half way to Athens GA to play on the Web.com Tour Stadium Challenge Wednesday afternoon when he got a call that we would be in the field at the Wells Fargo Championship and he turned right around and back another 2 hours to Charlotte NC.  Derek Ernst was the 4th Alternate and its pretty amazing that he even had the opportunity to play golf in Charlotte this week.

Derek Ernst had a really solid final round and birdied the final hole to be the low player in the club house at -8. The weather was terrible, heavy rain the last 4 holes for the final groups. Phil Mickelson had a 2 stoke lead at -9 then proceeded to bogie 16, 17 and pared 18 to shoot -7 in the final group.  Ernst was 2 shots back  from Phil and finished with par, par, birdie to go from -7, to -8 on the last hole;. There was very little coverage on Derek Ernst because he was 2 or 3 shots behind the leaders all day till the final 3 holes called the Green Mile. Ernst then had an impressive Sudden Death win against David Lynn who got a bogie from the greenside bunker on 18, Ernst pared the 18th hole against David Lynn and won the play-off and the Wells Fargo Championship.

Derek Ernst was the 1,207 ranked player in the world before this week and after this win he has moved the #187. Way to go Derek, I hope you enjoy your pay check of $1,188,000, Player Championship invite, Masters Invite, 2 year exemption on the PGA Tour and all the sponsorship opportunities that will come with this win.

Michael Phelps the most celebrated Olympian is making his way from the pool to the fairways.  The eight part series is set to air Feb 25th on the Golf Channel’s The Haney Project, where renowned golf coach Hank Haney will train Michael Phelps to stay away from water hazards and other traps around the […]

I recently came across a fantastic golf course that does not get much publicity. The Country Club of Johnston County located 1 mile off I-95 in North Carolina. It is a beautiful Ellis Maples Design. Ellis Maples designed golf courses in the mid to late 1960s. He is responsible for courses like Grandfather Mountain […]

Phil Mickelson looks to focus more on the Majors 2014

Phil Mickelson said in a press conference in Malaysia this week that he was going to cut down on the number of tournament he plays in next season. Focusing primarily on the Majors, – Not surprising considering he will be 44 next year and has not won the US Open yet. Phil: “I am going […]

Will Recent Rain Impact the US Open?

As June 13th approaches, speculation about the possible outcome of the 113th US Open builds. To be held on the east course at the Merion Golf Club in Ardmore, Pa, this will be the fifth time that the US Open has been held at this location. What makes this course unique is the presence of […]